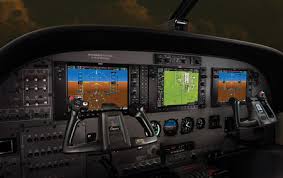 Avionics is the science of electronics used on aircraft, artificial satellites and spacecraft. Here, we are talking about aircraft avionics and the types of equipment used. Aircraft avionic systems comprise of communications, navigation, the display and management of multiple systems, and the hundreds of systems that are fitted to aircraft in order to perform different individual functions. Generally, Avionic systems of an aircraft are located at the cockpit of the aircraft. The type of electric system used in avionic systems differ with the type of aircraft. DC electrical system of 14 or 28V is used to power the avionic system of majority of aircraft. However, some sophisticated and larger aircraft like military planes require an AC system operating at 400Hz, 115V AC.

Aircraft avionics include the following system;

Fuel control is undoubtedly the most prioritized thing in an aircraft. Avionics uses Fuel Quantity Indication System (FQIS), which monitors the amount of fuel aboard. FQIS computer uses various sensors, such as capacitance tubes, temperature sensors, densitometers & level sensors to calculate the mass of fuel remaining on board. Similarly, Fuel Control and Monitoring System (FCMS) reports fuel remaining on board in a similar manner, but, by controlling pumps & valves, also manages fuel transfers around various tanks.

Everyone must have heard about “black box” in an aircraft. Black box is the flight recorder system used in aircraft. Black boxes are the commercial aircraft cockpit data recorders which store flight information and audio from the cockpit. They are often recovered from an aircraft after a crash to determine control settings and other parameters during the incident. Though it is called black box, black box is actually orange in color.

Besides the above mentioned systems avionics includes several other equipment like weathering systems such as weather radar, lightning detectors, radars, traffic alert and collision avoidance system (TCAS), glass cockpit, sonar, and the list goes on.

Check out this wikipedia link to learn about Avionics in detail. https://en.wikipedia.org/wiki/Avionics